Who's the guy in the in-flight entertainment system?

A while ago I had the (questionable) pleasure of being on a 11 hour transatlantic flight, heading to LA. Since passengers are getting upset that their water bottles are being thrown away before boarding, they have to be pleased some other way, and what could be better than a nice and shiny in-flight entertainment system?
There are a few different providers of in-flight entertainment systems, and aircrafts and fleets within the same airline often have different ones.

In this case, it really felt like a “new” system compared to the others I've seen. It had a touch-screen and quite a few different apps (or programs or software or whichever you prefer, I'll stick to “app” here).
The usual things were there, like watching movies or TV-shows. One thing though that struck me as weird, were that TV-shows were “aired” and looped. You had to wait until the currently running show was done, before it started again, kinda like having each channel on a TV looping a specific episode of a show. BIG step backwards..

As I guess many do, I started clicking around, checking features and which apps were available.
The in-flight entertainment system featured a few well known games (like Plants vs Zombies), a chat, an image viewer, and a PDF reader.

One of the first things I started to play around with was the communication app. When I clicked for it to start, there was something “flashing by” before the interface opened. Like a graphics glitch or something. I ignored it for a while to check out the actual program. It was a chat app which allowed chat rooms, and had instant messaging between different seats on the flight! Not really sure why someone would want that... Tinder for air travellers? Arranging a mile-high thing? But, as the hours passed, people showed up to tell jokes and riddles, and tell the rest of the passengers about their final destination or favorite restaurants. I didn't think someone would show up at the beginning, but I guess 11 hours strapped to a (way too tiny) seat brings joy in even simple things.

After a while I wanted to check out what might have caused the glitch in the beginning when the app was started. I exited the app, and started it again, but it went straight to its interface. No glitch, nothing fun, nothing special. Slightly saddened, but intrigued by this, I asked the person sitting in the seat next to me if I could check the app on their screen! After a confused acceptance, I clicked through to the app and started it. There was no glitch or anything weird, but there WAS a load-time of a second or two before its interface started. I exited it, and it started right away again, without delay.

Turning back to the system in front of me, I figured that the app was already in memory, which would explain why it loads so quickly the second time. I wanted the app out of memory, or exit some how, in order to see if the glitch/split-frame thing was still there when it started fresh again. I exited to the main menu, and back again through the menu system to the app, but it still loaded instantly.

I tried starting other apps, and back to it again, but nothing. I gave up for a while and watched an episode of some TV-show. Well, actually it was rather half of it, since the system so poorly tried to reflect a regular TV... “This episode has been running for 9 minutes, and will restart in 12 minutes”... thanks..
I had my hopes up after watching the show, but they were quickly shot down by the app starting instantly.
Looking at other things that was offered by the system, one thing struck me as interesting, or stupid, or something in-between.

Next to the display was a USB-port, and there was an interface for loading PDFs, images, music and movies from your own USB-stick! 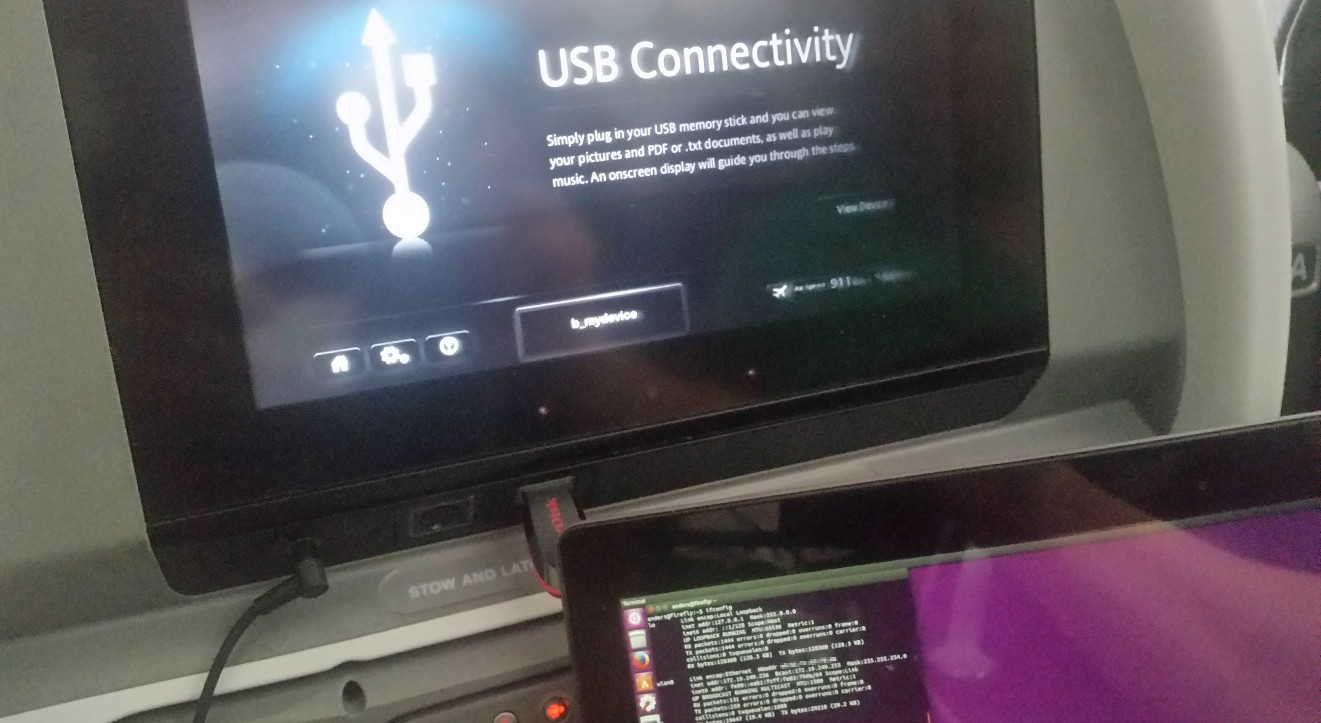 It might just be me being overly paranoid, but.. allowing USB access on these things, and loading arbitrary files and filesystems? Doesn't sound like the highest priority thing, and it's something that I'm sure many bored people will try to fuzz since they're stuck there for so many hours. Can you force it to boot from USB? Will it accept a USB keyboard? Probably neither, but.. who knows?

After playing around with the system some more, probably for half an hour or something, I got somewhere. I got an Android-like “App X is not responding. Do you want to close it?”.

Unfortunately, it wasn't my app, but it triggered my interest. Deeply. After yet some time, I think I got the entertainment system to restart! Well, or something. The screen turned black and unresponsive for a few minutes, before showing the welcome screen again! (Perhaps I'll write more about this in the future..)
I stared at the welcome screen for a while, then closed it and curiously swiped through the apps to get to the chat app. I clicked it, and... success!

Instead of starting right away, or even the quickly showing glitch, I got a loong 25 second(!) view of what I believe to be the internal app name (“i_communicate”) and a profile-image-like picture of a guy in glasses and a striped shirt!

I'm guessing this is probably the programmer for the app, and he hid some status/easter egg screen somewhere.

When the app was restarted, it loaded instantly again. I recreated “the situation”, waiting a few minutes more before the system showed the welcome screen, and.. there he was again! For just as long!

I don't know what triggered him to show for that long, and only on my system, or who he is, but.. it sure made the long flight quite a bit more enjoyable!

When I got back, I tried both reverse image search and tineye on the best quality image I could get, but nothing.

Tomorrow, I'm going over the pond once more, and I have to ask myself, will I see the mystery guy again?

6 comments on “Who's the guy in the in-flight entertainment system?”